A pop song from a 1990s Casio keyboard

When you’re making new music every week, sometimes you just have to roll with the punches. I have no idea what this song is. I have no idea where it came from. I found some samples of a tiny little (I think Casio?!?!) keyboard I had as a kid. I used to sit in my bedroom as a kid with nothing but that little keyboard with all it’s cheesy retro synth voices and makes full albums on a cassette deck that barely worked. So, when I found those samples I tried to recreate exactly the type of song I used to record. Straight forward, super simple melodies, guitar power chords.

If anyone finds a use for this song in their project, I would really love to hear it. It’s a bit of an odd one 🙂 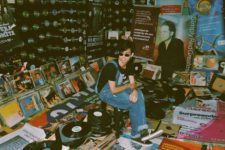